"Be the change you wish to see in the world."~Gandhi

Our third day of service was with Green Light New Orleans. This organization offers free CFL light bulbs (the swirly kind), installation and removal of old incandescent bulbs. The students were broken up into 4 groups. This day involved close contact with community members and keyed students into personal experiences with Hurricane Katrina and continuing issues of poverty. 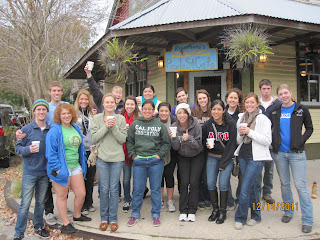 One group had the opportunity to spend half the day building a garden for a community member named Miss Dolores and the other half installing new light bulbs. The gardening experience was incredible. The students built a garden plot out of cinder blocks and planted vegetables, such as collard greens and strawberries. Miss Dolores was described as the sweetest lady ever with the warmth of a grandma. Another benefit to planting the garden was the idea of giving Miss Dolores a gift that would continue giving and helping. Neighbors around Miss Dolores saw her garden were wanting one like it as well – hopefully this will be an enterprise to spread all throughout New Orleans to get fresh produce to the community.
A different pair of students partnered with a Green Light interns to install light bulbs. As they ventured into the community, they noticed a disparity between the lower and higher income families. One student noted how she noticed that the lower income families had few other pieces of technology outside of televisions.  Video game consoles, computers, radios and other pieces of technology are common in most Californian households, but here these items were often absent. However, the families being served were incredibly grateful and would even try to donate at least a small amount to Green Light. This is contrasted to the high-income household the students saw. This household had a large home, complete with a TV in front of the toilet. Obviously, this is a very different situation than that of the families with lower incomes. However, the students noted that they did not feel as if the wealthier household was as grateful because they did not make a donation. The students had a good time getting to know the intern and interacting with the different families they helped. 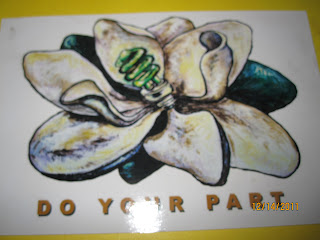 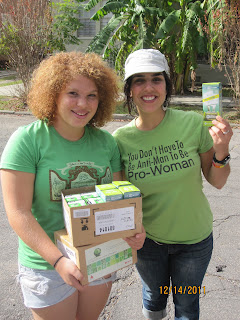 The next group had a much different experience with the people they served today. The first couple of houses they went to had a limited number of light bulbs they could install due to heights and what not. They also witnessed some difficult situations – poor housing conditions, difficult landlords and signs of illiteracy revealed some of the things that community members are dealing with. Even though it was sad to see such things, the students appreciated the insight into the reality many people are living with in New Orleans.  Their day was brightened upon meeting Miss Mary, who was really hospitable and nice. After the hurricane, she tried to live in a trailer in front of her house but someone else was blocking her. She has had to live in several different locations, hotels and apartments, but is looking forward into her home in the near future.
The fourth group of students had a really positive experience meeting community members and bonding together. The highlight of the day was Mama Deb. About halfway through the day, the group went to her house to install some light bulbs. She requested for only a couple of students to go into her home. The students that helped Mama Deb installed light bulbs and got to hear stories about Mama Deb’s experience with Hurricane Katrina. She ad stayed through the hurricane and didn’t leave until it had passed a week later. One of her tales recounted how she was watching her friend’s grocery store. Since the food was going to go to waste, a couple of guys were told to cook it all up. People from the neighborhood and military personnel would stop by for community dinners and to share a drink. Mama Deb also spoke about racial issues in her neighborhood. She told one story about the time she was hanging out with a white guy, and in response to some dirty looks from another black woman, Mama Deb began to hug and smooch her friend. The other woman was offended by such interactions between people from two different races and actually reported it to a couple of police officers near by. The officer, also being from different racial backgrounds, told the woman that if she closed her eyes that she wouldn’t see anything – dismissing her prejudice and forwarding an attitude of tolerance and acceptance. Though racial issues are sometimes thought to be completely resolved, Mama Deb reminded the students of its continuing presence and the benefits of those standing up against it.  The students also got to talk to other people who were here during the hurricane. One man told of how he almost missed the evacuation cut off and of his return to New Orleans, which was left without electricity for more than 8 months. He told of dark nights with the sound of gunshots in the distance but no way of seeing where it was coming from. Once more, the students got a deeper and more personal understanding of what happened during Hurricane Katrina and the still-continuing consequences. It was a great experience serving people with such good attitudes after facing and while facing such difficult circumstances. 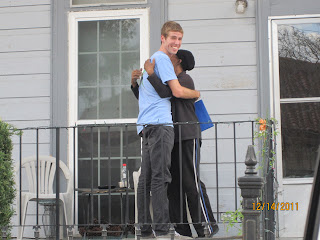